Lincoln Airport will once again get extra college football flights

United Airlines is once again offering special flights to college football destinations, and Lincoln will be included.

The airline offered the flights two years ago, adding a special nonstop flight from Columbus, Ohio, to Lincoln the weekend of the Nebraska-Ohio State game.

The flight proved very popular, and the airline is offering it again this year.

According to a schedule posted at United.com, there will be a direct flight from Columbus to Lincoln on the evening of Nov. 5 and a return direct flight from Lincoln to Columbus on Nov. 7. The Huskers and Buckeyes are scheduled to play at Memorial Stadium on Nov. 6.

This time around, Husker fans will also be able to fly directly to a game from Lincoln. United is offering a direct flight to Lansing, Michigan, the evening of Sept. 24 in advance of the Huskers’ game against Michigan State on Sept. 25. A direct return flight is scheduled for the morning of Sept. 26.

Michigan fans also will be able to fly straight to Lincoln for the Oct. 9 matchup with Nebraska. United is offering a direct flight from Detroit to Lincoln that day, with a return trip Sunday morning.

“We are excited to have these flights available again for the best fans in college football,” Lincoln airport officials said in a statement. “We love welcoming fans from all over the country to our wonderful community to experience gameday in Lincoln and have the opportunity for our fans to travel out of their local airport to watch the Huskers play.”

The flights are part of 44 new one-time direct flights the airline is introducing to allow college football fans to fly directly to game destinations they otherwise wouldn’t be able to. The airline also is adding 16 new direct flights for NFL games.

“Nothing brings people together like the opportunity to cheer on the teams they love,” Ankit Gupta, vice president of domestic network planning at United, said in a news release. “This upcoming season, United is adding even more direct flights to college and professional football games than we’ve ever added before so our customers can reunite with the teams, tailgates and touchdowns they may have missed last season.” 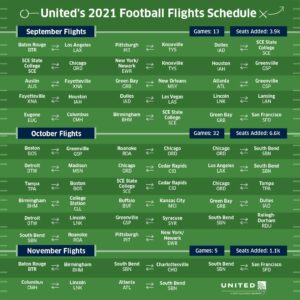